The weekend started off pretty relaxed compared to normal. Usually, we would slam all of our stuff into the van, pile in and head to the race. But this weekend we got there a little more glamorous…. 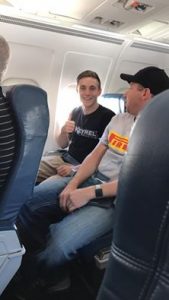 I took the short flight right to the Daytona International Airport with one of my mechanics Kody!  Saw some fellow racers that were also living the luxurious lifestyle as well! 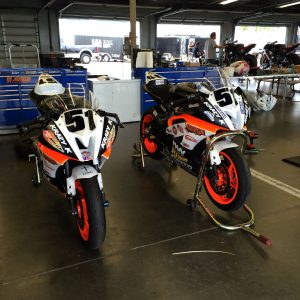 We arrived at Daytona, got everything set up and our bikes all ready to role! Then, one of my fellow competitors needed a little help, so my Team Worldwide crew helped him out and brought his bike back to the hotel.  They did an awesome job getting it together that night, so it was ready for practice! 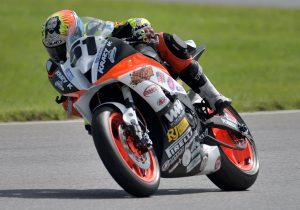 The Team Hammer track day went well. We played around with different set ups all day long, but I wasn’t really happy with anything we tried. I was a couple seconds off on lap times and the bike just wasn’t doing what I wanted it to do. We needed to figure out what the solution was to the get the bike and lap times to where they needed to be! 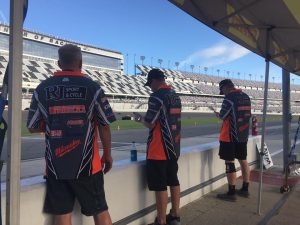 The first order of business on Saturday was qualifying for the ASRA on Sunday. As soon as my session was about to start, the rain started coming down and my crew worked hard to get the tires changed, but by the time they were finished there was 4 mins left in the session.  I was only able to get one lap in. I qualified on the 3rd row, but I wasn’t to worried. Most people didn’t even go out, because of the weather. 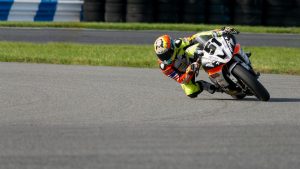 The main race on Saturday was yet to come. The 44 lap team challenge is the race that would give us the most data for the Daytona 200, which was one of our main goals for the weekend. I got a great jump and was running consistent laps. I came in for my pit stop, just before half way. My crew fueled the bike and changed the tire as fast as they could and BOOM, I was back in the race. As soon as I got back on the track, I could tell something wasn’t right. The bike felt different, but I kept pushing. It felt like the bike was getting slower and slower. Soon after that, I was shown the red and yellow striped flag and they were franticly pointing it at me. I had to pull off the track and withdraw from the race . The corner workers said the bike was smoking. As I was rolling back into the pits, the motor shut off and I knew that the motor was done. 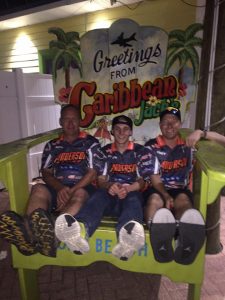 Unfortunate end to the day, but we took the positives out of the day. Then got some dinner at Caribbean Jack’s right on the water! Got refreshed, refueled and ready for a beautiful sunny Sunday!

Sunday morning, we hit the set up right on the head.  I dropped another 2 seconds a lap just like that! After practice, I went straight to church service during lunch! Raymond Rizzo had a great message and I was now ready to attack my races! 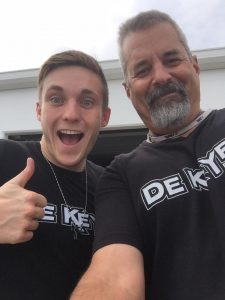 First race of the day was one of the greatest battles I had in a awhile. Off the start, I jumped right up into third place and was hunting down Cody and Michael. Couple laps into the race, I saw that the leader meat balled, which means he had to pull in for a stop and go penalty.  I then found myself trailing Cody. I was not far behind and just kept pushing to reel him in. I finally caught him, with 2 laps to go. I stayed right behind him on the last lap, so I could hopefully draft him to the line. Halfway around, I noticed that he was starting to slow down. I didn’t think there was anyone behind us, so I just followed. He braked checked me super hard going into the final horseshoe. I almost ran right into the back of him, so I just passed him and started to sprint to the line. Little did I realize, all this monkeying around allowed the third place rider to draft passed both of us to the line! I learned a very valuable lesson in this race and now know what my plan of attack will be in this situation. I ended up 3rd in the ASRA race.

None of it really mattered though, because in all of the chaos of blowing the motor the day before. Having to switch everything over to the other bike. We forgot to put the SS air filter into the new bike. My crew worked very hard all weekend with all that had gone wrong and we now know what we have to correct in March for the 200. 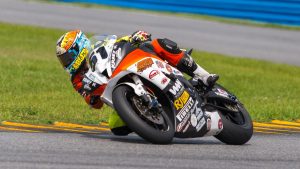 The next three races went great to finish up the day with two 3rd’s and a 2nd. I had such an awesome weekend working with the new crew! We only have worked together for one weekend other than this. We will continue to grow together next season and the little mistakes on track and in the pits will start to minimize. 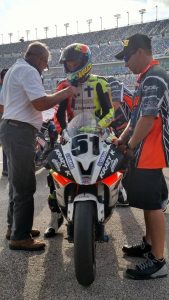 I can not thank my crew enough for how hard they worked to get me feeling comfortable and riding fast! After all the hard work was done, can you guess where we were heading? 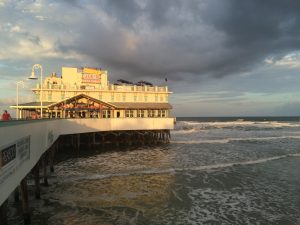 The beach! We had a fabulous dinner at Joe’s Crab Shack on the Daytona Beach Pier to finish out the weekend! I enjoyed every minute of the weekend and had so much fun with all the crew guys! Kody, Japs, John and Johnny all made this weekend a weekend I will never forget! 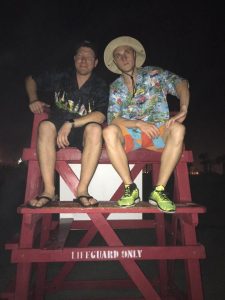