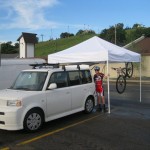 After a long day in Iowa on Saturday. Kaleb resided he wanted to do the Buckhill Mountain bike race in Burnsville MN on Sunday. 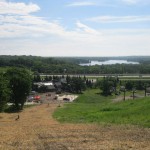 Mason decided he would savor his victory and sleep in.

It had just finished up raining about an hour before Kalebs race was to start and the temps were climbing. It was to be a high of 98 degrees.

Kalebs race started at 9:30 am and he would go out in the second wave. The race was set for 2 laps and the course was layed out as a 5-1/2 mile loop.

The race started and Kaleb went right to the front. He had never seen this course before so he followed a rider for the first part of the race. After crossing to start the second lap Kaleb was in about 11th place. He now new the course and was starting to push. Kaleb had worked his way up into 5th overall in the race and first in his class by the end of the race. I asked him how the race went and he said great other than a crash on the cement section of the course. Kaleb said he just came in to hot and lost the front on the concrete. “It was fun” 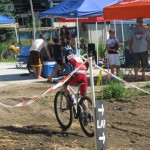 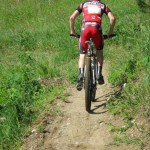 Kaleb and his Dad hung out for awhile cheering on the other Team SHO-AIR MN racers. It was a fun Hot day of mountain bike racing. 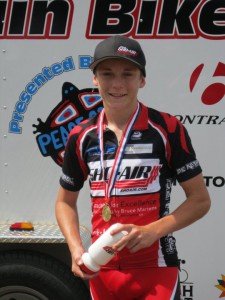