Friday morning I went out for a warm up on my bicycle then got to meet my mechanic Eric Grey and his girlfriend Deb. I started out on my Yamaha R6 for the first two sessions just to get used to the track. I really liked the track and I was really excited to test the 1-855-CzaiaLaw.com Honda CBR600RR. 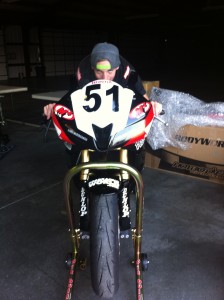 Team Hammer did an amazing job preparing this motorcycle for me. After the first two sessions were done we got the Honda all set up for me. Eric moved the bars, foot pegs and shifters to more how I liked it. 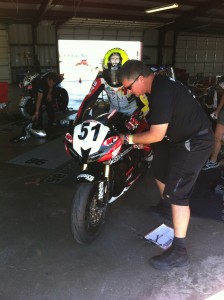 Then we headed out for session 3. I really liked the Honda and the track was a lot of fun. I knew it was going to be a good weekend! Overall Friday practice went good and I got comfortable on the new bike. Eric got the bike working well and I felt confident going into the races. 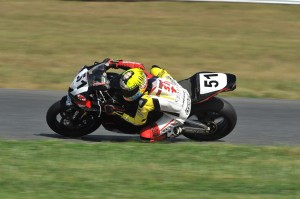 Saturday morning I got up and did a little stretching. Then put my suit on right away and got ready for the day. My first race of the day was the GTU and I finished 4th place in my first race on the Honda. I was having trouble transitioning the bike from right and left. Eric and I talked about it and made changes to the set up for the next race. I finished 3rd place in the MWGP race and we were getting the bike better for me. 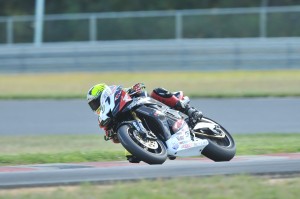 I had been starting in the back and learned quickly that this is a tough track to pass on. I finished fifth in the next two races MWSS and MWSB. I was struggling on the Honda with the first shift. I was to slow on the shift for I was not used to the short first gear. Saturday was a great day of learning the bike and the track but I was looking forward to Sunday. 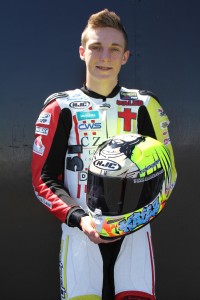 Sunday started off with one twenty minute round of practice right away in the morning then straight to racing. I changed up my starting positioning to be able to get a quicker shift in. HWSS and MWSS were the first two races for me. I finished 3rd and 2nd to start off the day good! My change on the start was already paying off. 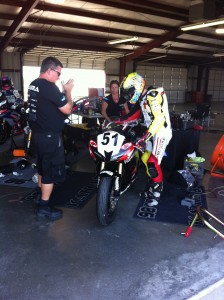 I had a crazy battle with Eric Stump (DSB rider) and Nick McFadden (SS rider). Nick and I had gone back and forth but it was the last lap that really had me excited. Nick passed me on the brakes going into turn 1. I patiently followed behind till the last corner and got a better driving coming out of turn 14 to beat him right at the line. I was confident my Honda CBR600RR could beat him. HWSB was another interesting race. 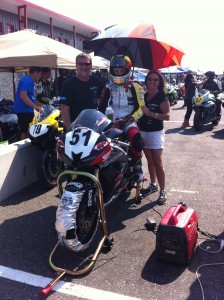 I went to out brake Babuska in turn 1. Then got pushed wide by Alex Shaw. I was out in the dirt still on the gas and reentered the track behind Nick. The announcer Deano Swims was going nuts over the microphone that De Keyrel just motocrossed it around turn one and reentred behind McFadden. I just ran off the rumble into the dirt a little bit and got back on track then caught Alex Shaw again right on the last lap! I didn’t have enough time to make a move though so I finished in 4th place. MWSB I had great battles again and finished in 4th also. 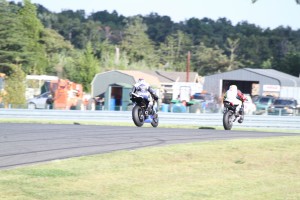 The last race of the weekend was MWGP. I finished the weekend on a high note getting a 2nd place to Mark Miller. I think the weekend went good and it gave me a good idea what passing will be like for the AMA races. I have a good feel of the bike. Eric did a great job getting the set up close. I am really looking forward to working with Eric again and racing my 1-855-CzaiaLaw.com Honda CBR600RR at the next AMA round at New Jersey Motorsports on September 13-15! Hope to see you there.
Kaleb De Keyrel #51