First practice just went out to see what the banking was like. After the first lap, I knew that Daytona on a KTM 390 was gonna be really slow. After the first session,  I had got used to the banking, it was way different than anything I had ever done before. Its like a straight, but you are leaned over. I had a lot of fun keeping it pinned the rest of the day. We also had a fun time at the AIMExpo. 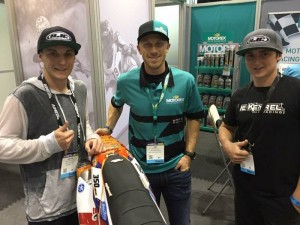 Friday
I felt good going into my second day at Daytona.  My lap times were dropping lap by lap. Daytona is definitely a motor track. The bigger bike you have the more fun you will have for sure.
Saturday
Morning warm up I got to ride the bike I was going to run in the team challenge which was an SV650.
Team Challenge started off good. My team got a decent start from the back and started working our way forward. When I got on the bike,  I just wanted to do consistent laps at a good pace. After the team Challenge was over we found out we ended up 4th in class.  GT ultralights started 25 minutes after the team challenge. I got a decent start and was in third. I made a mistake trying to go for second and that made me loose the draft and then the race got cut short due to a red flag, so we only got 3 laps. 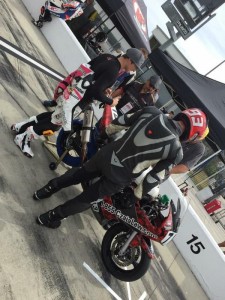 Sunday
Race 1 was 500 Super Sport. I got a good start and was in third and was trying to get into second. I finally got the draft and got into second and was battling for first. In turn 1, I was in the lead.  I lost the rear and slid out. I hopped up right away trying to look at how bad the bike was and seeing if I could get back on and ride it. 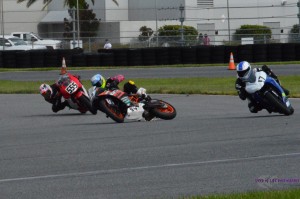 The right bar ended up being broke, so I couldn’t finish the race. Race 2 was Moto3. I got a good start and was in 2nd and was fighting for the lead until I got to the banking and the 125 2 strokes had way more motor than my 390, so I rode the rest of the race in 4th as the 125s pulled way. It was great to get an opportunity to race at Daytona. 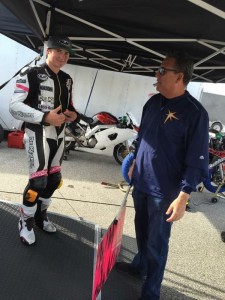 Thank you to CJ Czaia for having me come down.  Also Huge thanks to mark from TSE for working with and helping me all weekend.
This entry was posted in Uncategorized. Bookmark the permalink.