The weekend started with the 125 motor that was guaranteed to be to De Keyrel Racing on Tuesday being delivered on Thursday, 2 hours before leaving for Brainerd International raceway. Doug ( Kaleb’s Dad ) went to work and installed the motor and was able to get two heat cycles on it before loading it in. It was going to be a great weekend. It had looked like Kaleb was only going to have one bike for the weekend but now he would have both bikes. They arrived at the track at 10 pm on Thursday night and set up for the weekend. Kaleb and Mason were excited to show off their new helmet sponsor HJC.

Friday was practice all day. The goals were to get the 125 broke in and set the bikes up for the weekend. Kaleb would also be testing a 1996 TZ 250 of Brian Okabo’s. Kaleb road the MORIWAKI MD 250 in the slow practice and the HONDA RS 125 in medium practice. The weather was perfect for practice on Friday, sunny and 75 degrees. The MORIWAKI was set up and running great. Kaleb worked in the morning on breaking the RS 125 in. After lunch De Keyrel Racing started to dial the 125 in for the race weekend. The jetting seemed to be off and the bike was not running correctly. Kaleb said the throttle response was poor and the bike kept shutting off and he would have to bump start it again on the track. Doug checked all the electrical connections to make sure they were tight and everything looked good. Kaleb said the bike was still cutting out. Doug decided to have Brian Okabo take the bike out for a session to see what he thought it was. Brian did not even hit the track with it and said it was too fat on mid range. We made some jetting changes and Kaleb went back out. The bike made two more laps and seized up. Doug tore the bike apart and found bad destination on the piston and later learned that there was an air leak in the cylinder head and reed cage. Brian ended up crashing the TZ 250 that Kaleb was going to test so that was out for the day too. They put the 125 aside and focused on the MORIWAKI.

Saturday was a full day for Kaleb with 5 sprint races.  Practice went smooth and now it was time for racing. Kaleb started out the day with 2 seconds and was riding great. The light weight classes were going to be tough with the races being on the famous BIR long track. There is a lot of wide open section with the drag strip and then all the way into turn three. The bigger HP bikes definitely had an advantage. 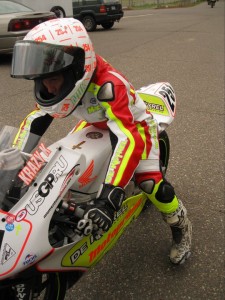 At lunch the CRA has  “try the track” where anyone with a driver’s license can take 4 laps around the track at a controlled pace. Doug heard the announcement for this and decided to see if they would allow Mason to participate. The officials said yes. Mason suited up and was out on the BIR track for the first time. It was great to see Mason getting track time at a CRA event. Mason road the “try the track” both days and had a blast.

Saturday the last race of the day was an invite only race, The Framsted Cup. They take the fastest 2 racers from each class, use their best lap time, than start them all so they cross the finish line at the same time. The slowest racer starts first, then a gap by time. Then the next and next until the fastest racer goes off the start. The first racer had already done a lap before the fastest guy left the start. Kaleb was invited to run this race and started 7th.  It was a fun race to watch and Kaleb did great with a 4th place finish. Saturday’s races went late ending at 6:30 with the Framsted Cup. Church was scheduled for 7:00pm. Doug packed everything away for the night and Heather, Kaleb and Mason headed to church. Doug hung out with Levi as he was sick with the flu.

After church another racer offered to buy us all dinner at Zorbas. Zorbas was a sponsor of theirs and they allowed them to bring racers to eat and then Zorbas would pick up the bill.  Heather stayed at the track with Levi and Doug, Kaleb and Mason went to dinner with the group. Great food. 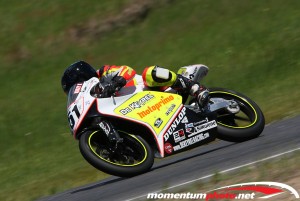 Sunday was another full day for Kaleb with 5 sprints again. The weather was perfect again with sunny skies and 68 degrees. Brian still wanted to see Kaleb on the TZ 250 so he let him test his 2000 TZ 250 in practice. Kaleb looked great on the bike for his first time on it. Sunday started out even better for Kaleb than Saturday by bettering his first two races with wins in both classes. The third race of the day was light weight superbike. Kaleb knew he would have to push hard in the turns if he was going to have a chance against the bigger HP bikes. Kaleb got a great jump and was running near the front. With 1 lap to go Kaleb did not come around. It was radioed in that 2 riders had gone down in turn 8. Kaleb was loaded into the ambulance and transported to the onsite medical center. When they opened the doors of the ambulance to move Kaleb into the medical center Kaleb hollered to his dad. “Dad I am fine. Get me out of here”. Kaleb was released to his Dad and mom with a sore hip. The other rider was ok too. We learned later that the other rider saw Rossi try this move on Stoner in a corner. Rossi lost the front too and took out Stoner. When the bike came back on the crash truck it was apparent that the weekend’s racing was over. Doug went to work cleaning the bike and started to load everything up. It was a great weekend. The new HJC helmet did its job, Cortech leathers held up awesome, weather was great, met some new racers, got a couple of young fan’s pictures on the bikes and Mason got 8 laps in. The family was together for the weekend and everyone was safe.

Here is a link to more pictures of the weekend: http://www.momentumphoto.net/events/cra/2011/june/251/index.html