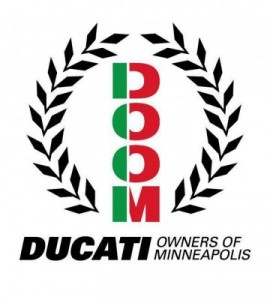 De Keyrel Racing recieved a phone call about a track day at Brainerd International Raceway. We were told the trackday was being put on by Ducati Minneapolis and that everything was taken care of. Just show up ride and have fun.


It was supposed to be rainy and cold all day. I did not care. It was free track time and beside we race when it is raining and cold. The day started off with some sprinkles here and there but it ended up being sunny and warm. I started off slow and worked on hitting my apexâ?‚??„?s. Then sense I knew I had my apexes down I started to push. I got one great session in and then when the bike start to act up. When it would get warm it would start to cut out. My dad checked all the electrical connections. The next session I worked my pace up and the bike started to cut out again. I came off to prevent anymore damage to the bike.

After lunch I mounted up John baklunds GoPro on to my bike and followed him around a couple of laps. I shot some video and I think he found some ways to make up time on the track.

The next session I went out and the bike started to cut out right away. So I came in. Up untill now it had been about 15 to 20 minutes into the session before it would act up. It was awesome to get on the track before the first CRA race and find this problems out. I had a great time at the Ducati Minneapolis trackday. There were some fast riders there and we just got to hang out with some awesome people.

Mason was riding great. He had only been on the track for a try the track session before. So this was his first chance to go all out. Masons day ended early with another motor failure. This was the motor we had just bought with only four races on it. It may have been a short day for Mason but a very vailuable one. It was track time at BIR where he would have to be watched to get his license the following weekend.

A huge THANK YOU to DOOM Ducati owners of Minneapolis Jon Meyer and Jon Baklund.

Ducati Minneapolis, My mom for letting us makeup school and my dad for all his hard work.